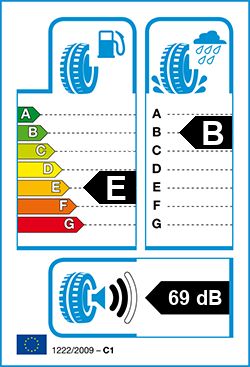 season: m+s
fuel consumption: E
grip: B
noise level: 69
noise level: 1
The successor to the EUROALL SEASON AS200 has a V-shaped pattern with deeper grooves for enhanced water distribution, thus optimising performance in both wet and dry conditions and maximising aquaplaning resistance. Compared to its predecessor, the new EUROALL SEASON AS210 has improved aquaplaning characteristics by 8% and wet braking by 6%. During travel, the sipes align themselves to the direction of traction to enhance force transmission and provide outstanding grip in all weathers including snow. Thanks to these multidirectional sipes, braking performance has been further improved, particularly on snowy roads.

Using Advanced 4D-Nano Design technology to develop the compound, Falken succeeded in increasing the mileage of the EUROALL SEASON AS210 by 10% compared to its predecessor. This technology optimises the interaction of the compound elements at nano level, and also enhances grip.

“We are confident that the EUROALL SEASON AS210 will continue the success of the EUROALL SEASON line”, comments Markus Bögner, Managing Director and COO at Falken Tyre, on the debut of the new tyre. “Its predecessor received top placing overall in tests conducted by the popular German motoring magazine, AUTO BILD, in 2013 and was rated ‘Good’ by AUTOBILD ALLRAD and trade journal Gute Fahrt in 2016.”

The European-manufactured EUROALL SEASON AS210, which will debut at the Tire Cologne 2018 trade show in Cologne at the end of May, will initially be launched in 48 sizes from 13” to 19” in series 70 – 40 in speed ratings T, H and V. A further twenty sizes will follow in August 2018.